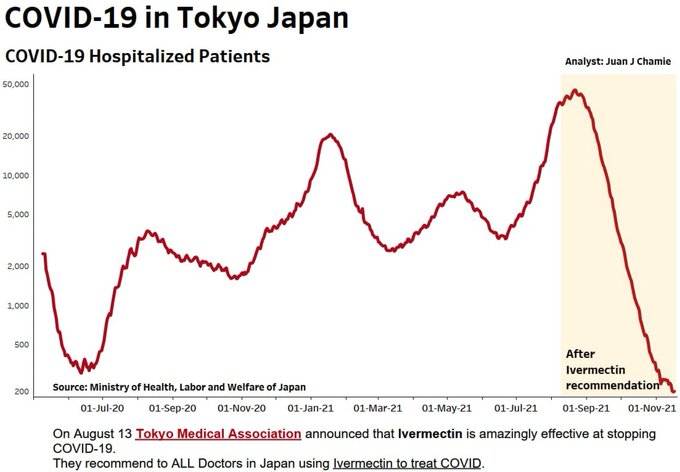 Dr, Pierre Kory tweets: Tokyo in particular is kicking COVID’s ass with IVM – fewest hospitalized since before pandemic. Come on world, wake up wake up wake up

In February 2021, Dr. Ozaki Chairman of the Tokyo Medical Association declared that Japan’s physicians should get a greenlight to prescribe IVM (Ivermectin) at the first sign of SARS CV infections.

Now in August, Tokyo Medical Association chairman Haruo Ozaki reiterated that ivermectin should be widely used and said that his early recommendations have not been heeded in Japan.  See Lifesite article August 30, 2021 Japanese medical chairman doubles down on ivermectin support after early calls went ignored.  Excerpts in italics with my bolds

In an interview with the The Yomiuri Shimbun on August 5, Ozaki spoke in detail about his opinion that ivermectin should be used in Japan and said that his early calls for usage have…

MLK Day Proves One Thing: Blacks Have Always Loved to Celebrate a Degenerate!

Another Monday in Nova Anglia

And I am out

The Meaning of Anti-Whiteness

Watch “Score Another One for the Tin Foil Hats” on YouTube

Work Here Is Ending for an Undetermined Time

Let Our Vision Overcome The Narratives

I’m Taking A Break From WordPress For A While

The Tale of Genji

Elizabeth towards War I

Why is the woke libertine panopticon an existential threat to cultural conservatism?