“If the freedom of speech be taken away, then dumb and silent we may be led, like sheep to the slaughter.”—George Washington

The architects of the American police state must think we’re idiots.

With every passing day, we’re being moved further down the road towards a totalitarian society characterized by government censorship, violence, corruption, hypocrisy and intolerance, all packaged for our supposed benefit in the Orwellian doublespeak of national security, tolerance and so-called “government speech.” 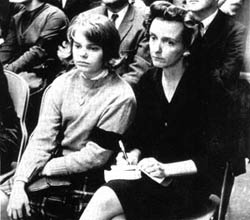 Long gone are the days when advocates of free speech could prevail in a case such as Tinker v. Des Moines. Indeed, it’s been 50 years since 13-year-old Mary Beth Tinker was suspended for wearing a black armband to school in protest of the Vietnam War. In taking up her case, the U.S. Supreme Court declared that students do not “shed their constitutional rights to freedom of speech or expression at the schoolhouse…

Heat: A Movie For The Atomized Man

The prehistoric Eurasians: The Proto-Indo-Europeans — muunyayo

The Internet of Things and You

We are Winning (Video)

UK: Conservative MP Stabbed To Death By Somali Was A Strong Supporter Of Black Lives Matter

WE ARE ALL BEING COOKED IN THE SOUP TOGETHER

Is USoS Nuland attempting to start another Maidan in Lebanon?

Peter Hitchens on the new state police and entertainment as propaganda